Over the week, we received a series of economic updates that Wall Street enthusiasts touted as an overwhelmingly positive view of the economy's progression.  But, let’s take a sober look at the numbers market enthusiasts want you to hang the future of your life savings upon.  Consider the following data for February:

So, these are the headlines.  All presented correctly.  Not a single falsehood among them.  Why should anyone be concerned?  Good times are here again!  And, market enthusiast would tell you, not only have they been here now for quite some time; they’re more than likely here for the foreseeable future!  Why?  Because indicators beat their expectations!

Isn’t that what the average investor hears when the expert talking heads say, “things are even better than market gurus expected”?

What if the “expectations”, which the market supposedly “beat”, were purposefully set low by the “experts”?

Wouldn’t that be like lowering the bar so that the weaker athlete could make the jump and look strong?  The truth is, a low bar does not measure the strength of an athlete.  However, it sure can make him look good to the novice spectator!

See how easy it is to manipulate the novice… of almost anything?  Most middle and upper middle class investors are novice.  Let’s be honest.  Most of us can’t even understand our monthly statements.  I know, I meet with hundreds of you every year!

The truth is, everything is relative.  One man’s trash is another man’s treasure.  What looks good to some, is repulsive to others.

Can we trust these economic reports?  Or, have the standards, used to measure today’s market strength, been so watered down that they actually make what is weak, appear strong?

Let me offer two examples for your consideration.  Let’s take the same headlines we read above, but, let’s just add two small words to each headline.  See how differently you feel after just this slight modification:

Still feeling like it’s a bullet proof market?  Still feel like your life savings is setting on solid ground? Ready to leap tall buildings with a single bound?

Not quite, eh.  Context is everything when communicating to a group of people who, well…, lack context.  Is it not?

Now, let’s take the final headline we first read above. This one you’ll probably find quite interesting in light of our conversation up to this point.

I find this one particularly juicy.  Here, pro market bias is blatantly misleading, in my opinion.  The writer of this headline goes even one step further, offering a relative point of comparison (highest measure for single family home construction since 2007) to further back his intended “take away” that things are just really super-good right now!

Ignorance is bliss as they say…

What he doesn’t tell you, (and what he may not want you to know), is that these same housing starts are STILL DOWN over 40% from their high in 2006 - before the real estate market began to crash in 2007.

The real bar – if we’re measuring the relative strength of the housing market – would be the bar we cleared while we were at the top of our game.  Would it not?  But that’s not the bar this headline writer uses.

Another way of saying this headline, (perhaps contextually more accurate) would be, “Housing Starts still down 40% from 2006 highs”.

But then, that wouldn’t give you (the novice), nearly as much of a warm and fuzzy feeling now.

Finally, let’s talk about the BIG news:  The Fed raising interest rates.  That surely signals were in a red hot recovery, right?

The markets expected the Federal Reserve's March 15 decision to raise benchmark interest rates. Most pro Wall Street talking heads will tell you this is a strong indicator of how well things are going.  But, like Housing Starts in our last example, context is everything.

Here’s some context the pro market purveyors of eternal risk for your life savings, don’t want you to think about.

Last week's 0.25% increase is only the third jump since the Great Recession. The Fed has now raised rates in December 2015, December 2016, and March 2017 and expects at least two more increases this year.

Like with all economic data, understanding the context is critical. Left alone, the above statements might lead one to believe, things are really hot now.  The truth (revealed with context) may tell a different story.  While interest rates are on the rise, they are still low, as you can see in the chart below. 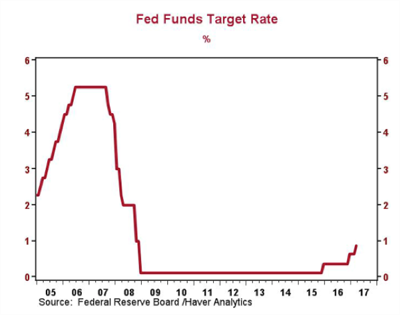 The truth is, we’ve sustain THE benchmark Federal Fund rate below 1% now for almost a decade.  Contextual truth-telling would be forced to admit that, at the very modest least, we’re still a long way from a strong economy.  Period.   No recovery in history looks like the chart above.  Yet our stock market has recovered – how can that be?  (Think back to last week’s update).

The Week on Wall Street Shrugging off COVID-19 infections and the disruption at the Capitol on January 6, stocks powered higher to kick off a new year of trading.The Dow Jones Industrial Average gained 1.61%, while the Standard &...

The Week on Wall Street Stocks moved higher during a holiday-shortened week of trading, capping off a turbulent, but otherwise strong year for equity investors. The Dow Jones Industrial Average gained 1.35%, while the Standard &...

The Week on Wall Street Stocks climbed higher amid the COVID-19 vaccine rollout and an improving outlook for a fiscal stimulus bill.The Dow Jones Industrial Average, which has lagged all year, gained 0.44%. The Standard & Poor’s 500...