This week, the Fed meets to determine whether or not to raise benchmark interest rates for the first time in 2017. Right now, the market gives a 93% chance of a rate hike. In this update, rather than analyzing what lies ahead or what happened last week, we would like to acknowledge just how far the U.S. economy has come since 2009.

On March 9, we marked the 8-year anniversary of when markets during the Great Recession hit the bottom on their lowest day. At that point in the economic meltdown, the Dow and S&P 500 had both lost more than 50% of their value since October 2007. Every investor likely remembers the fear that gripped the U.S. and global economies, as questions lingered of how low we could go.

Today, we can see just how far the markets and economy have come since March 2009 - and the growth investors could have missed if they avoided the markets. Take, for instance, the S&P 500. 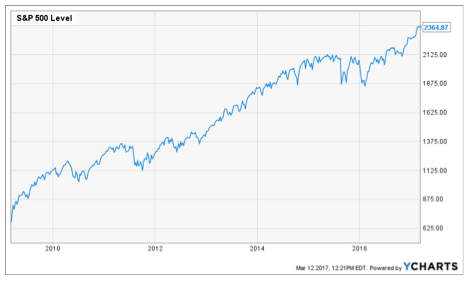 But the real question staring down every sane inquisitive investor is, WHY?  What in the world is driving this unprecedented stock market recovery?

Lovers of the market would list for you a myriad of statistics that support the current run up in stock prices as legitimate.  Let's take the number one bench mark - GDP.  But, lets not just the read the headline.  Let's question it!

Headline:  GDP recovery has shown growth in nearly every quarter since 2009.

Ok, sounds supportive.  But how does a GDP growing at less than 2% per year (through the end of 2016), support a market recovery (growth) that has averaged over 15% a year with dividends reinvested?  Hmm?  A reasonable, inquisitive investor might assume, "Something's Afoot"!

No one need look further.  Anyone with half a brain knows those numbers simply don't add up.  At least not "legitimately."  So where DID all that market growth come from?  Certainly not from American workers earning enough extra income to invest in stocks again.  Most Americans, (even if they're employed) haven't seen a real wage increase, adjusted for inflation, in two decades.

New Flash:  It takes NEW money to inflate stock prices.  PEOPLE have to buy stocks.  Which means, people have to earn enough extra money - beyond living expenses - to purchase stocks.  Everyone knows that's not happening!  Was not the election of Donald J Trump, in large part, a referendum on the REAL economy's STAGNATION?

So again, where is the stock market getting its fuel for this recovery?  Too many investors today are not asking that question, let alone demanding answers to it.

"Who cares", they say.  "All that matters is my life savings is back to a positive number!"

Are they correct?  Does it really matter?

However, "yes", if you plan to stay invested in the market over the longer haul.  Why?  Because what drove the recovery will dictate how long it will continue and, how far it will fall, when it falls.  If one really believes the market can grow organically, naturally, real, legitimate, trustworthy growth - all while working class incomes haven't; while GDP growth (if honestly reported) has been poultry by any standard; then one must also believe in legitimacy of the tooth fairy.

My advice, cash out now.  Worry less about hitting the top of this market, and more about walking away with your money while you still have at least some your life savings intact.

So I'll pose the question again:  Where DID the money come from?  What is the engine that has fueled this stock market recovery?

To find out what, all one has to do is follow where the money that fueled this recovery came from.  And, of course, have the courage and common sense to believe wherever that truth leads.

Hint:  It did not come from you and me.  Nor could its source have come from any mathematical standard supported by our nation's real economic GDP growth.

6+ trillion dollars and counting...  Where did it all come from?  And, can that source be counted on to sustain the market's future stability?

My clients (and I) prefer not to gamble on the answer!

The Week on Wall Street Shrugging off COVID-19 infections and the disruption at the Capitol on January 6, stocks powered higher to kick off a new year of trading.The Dow Jones Industrial Average gained 1.61%, while the Standard &...

The Week on Wall Street Stocks moved higher during a holiday-shortened week of trading, capping off a turbulent, but otherwise strong year for equity investors. The Dow Jones Industrial Average gained 1.35%, while the Standard &...

The Week on Wall Street Stocks climbed higher amid the COVID-19 vaccine rollout and an improving outlook for a fiscal stimulus bill.The Dow Jones Industrial Average, which has lagged all year, gained 0.44%. The Standard & Poor’s 500...